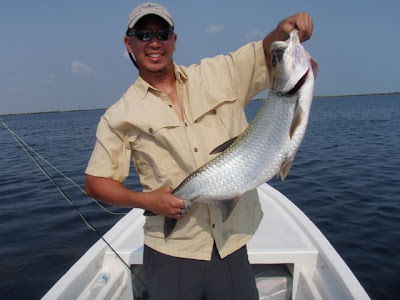 Tom with a grande baby Tarpon on the flats...
Last week, we received a nice post-trip report from our customer Tom of SoCal. He fished at Tarpon Cay Lodge and reported that he had excellent fishing on the flats and mangrove creeks for baby Tarpon up to 20+ pounds. Here is a testimonial:

"Tarpon Cay Lodge is an amazing fishing destination. I've fished all over the world and the fishing is on par with some of the great angling destinations in the world. The flats sight fishing for baby tarpon was absolutely spectacular, and the jungle creek fishing just added another dimension to the fun. The hospitality at the hotel was exceptional, and the food, especially the fresh seafood, was way beyond my expectations. I can't wait to go back! 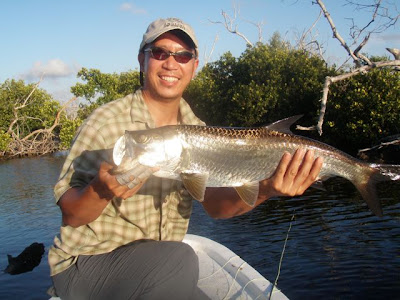 Here is another raw clip of underwater video footage while fishing at Isla del Sabalo... I am quite new to this underwater video scene, but you can be sure that I will keep sharing this incredible perspective. Wow, seeing fish from beneath the surface is so much more captivating than viewing them from above. More to come tomorrow... we will be fishing at Isla Blanca and will try to get underwater footage of Permit, baby Tarpon, and other species. Wish us luck!

Here is a raw video clip of a baby Tarpon caught and released in one of the rios at Isla del Sabalo. We fished there two day this past week and some of the rivers were quite full of active baby Tarpon. What we discovered is that, as much as baby Tarpon are a creature of beauty when landed, they are even more awesome to admire when they are in their underwater world. Check out this interesting footage...
Video Camera: Sony HDR-HC1 (HD)
Underwater Housing: Epic Pro V1
Posted by Keith Kaneko at 7:19 PM

I am down in the Yucatan right now with Marco Ruz of Yucatan Fly Fishing Adventures. We just returned from our video shoot and fishing trip to Isla del Sabalo. We captured some nice video footage of baby Tarpon and Snook being landed on the fly. Here is a raw clip of some continuous footage of Marco landing a nice Snook.

I will be adding more footage in the next posts... including some very nice underwater footage of Tarpon. Fish On! 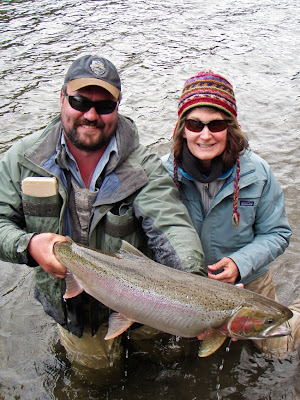 Guide Dustin and Sonja with a beautiful BC Steelhead 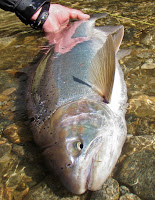 BC in the spring is my favorite time of the year to pursue the mighty Steelhead in the Lower Skeena region. It is at this time of the year that fly anglers have a dense mix of winter-holdover Steelhead that arrived during the previous fall months, along with the new arrival of dime bright spring Steelhead. And just this past weekend, a couple of my die-hard Steelhead customers, Sonja and Don, just returned from their Steelhead adventure near Terrace, British Columbia. Both of them are long time repeat guests and anglers of Nicholas Dean Lodge. 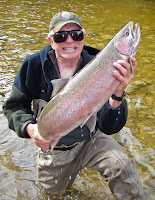 Sonja and Don scored an impressive week while fishing with guides Dustin and Sky. Don's personal bests for the week were two Steelhead that went 15+ pounds! And not to be outdone was Sonja who topped the week with an impressive Steelhead that went almost 19 pounds! Yes, spring is truly an incredible time of the year to fish for BC Steelhead.
They fished a variety of river during their week. Steelhead pursuits were on the Kalum River, Kitimat River, and a remote coastal river. All fisheries yielded Steelhead during their week. Impressive! Way to go Sonja and Don!

Looking ahead to next year's spring season, Angling On The Fly will be hosting another spring week at Nicholas Dean Lodge next season. The exact dates of next year's spring trip is April 11 - 17, 2010. Please contact us if you would like more information about this trip.

Well, spring is fading away fast now... it won't be long before us Steelheaders will be chasing summer Steelhead. Until then, keep your loop tight and Fish On!
Keith Kaneko 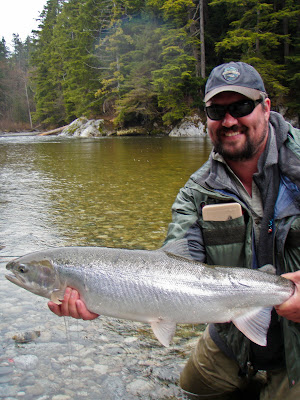 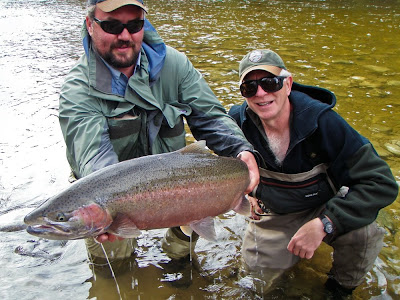 Dustin and Don with one of two 15+ pound Steelies... 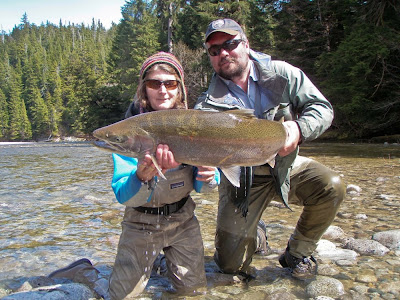 Sonja with her impressive fish of the week... 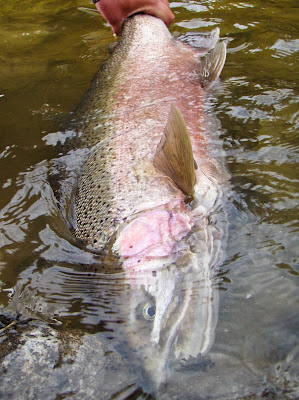 Majestic BC Steelhead...
Posted by Keith Kaneko at 8:36 PM