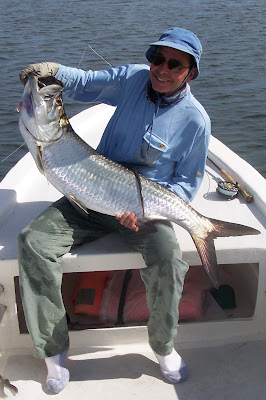 Bill definitely needed two hands to handle this whopper
The following joint report has just come in from long time fishing friends Bill Ninke (New Jersey), Bob Huddleston (Minnesota) and Gary Fritz (Montana) who spent this week at Tarpon Cay Lodge. Bill and Gary are repeat clients, having spent a week last August at TCL. Bob, upon hearing their glowing reports from last year, decided to join them this year.

“To maximize our fishing opportunities, we booked the option where we each had an individual guide and boat each day. We also chose a schedule so that each of us spent two consecutive days with each guide. This proved to be a wonderful arrangement. Each guide is excellent but has a somewhat different style, giving us a variety of experiences. 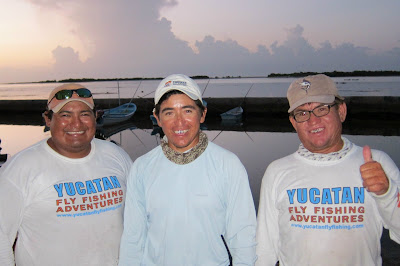 Our three guide amigos – Martin, Cresp, and Carlos
Convinced that the baby tarpon would always be available, we tried for larger tarpon down near the light house the first four mornings. Winds were fair the first and third mornings and very calm the second. We caught some 20 and 30 pounders those three days. Bill landed the biggest that Carlos estimated was near 60 pounds.

‘From less than 200 feet away I saw the fish roll. Bill, who was 80 feet away, made two false casts and landed his fly next to the fish. The tarpon instantly ate the fly and the battle was on. That cast would not have happened the previous year because Bill was not a distance caster. He took the time and made the effort to become a vastly better caster in salt water and his lessons and practice his last year paid off with that gorgeous tarpon, as well as others. I’m particularly proud of Bill because, as a guide, I see tons of anglers, especially older ones, who cannot or will not improve their fishing experience by becoming better casters. Bill wanted to do this and did.’

We ran down to the light house area again the fourth morning but the winds were too high once we got there and we went back to baby tarpon. Bob and Gary discovered an easy test determine whether a try for the bigger tarpon was merited. They stood in the gap between the east end of the hotel and the next building first thing in the morning. If they felt a distinct breeze, it was going to be too windy to try. If near dead calm, it was off to the light house.

The last three mornings it was fishing for babies in the creek mouths and creeks. Most afternoons we had showers. One afternoon was entirely wiped out and another was cut short by two hours. Afternoon tides were quite low so the baby tarpon were on the flats. Gray skies and wind made finding fish and getting them to eat very difficult. But, we still all caught tarpon. Most were in the normal size range for TCL fish. 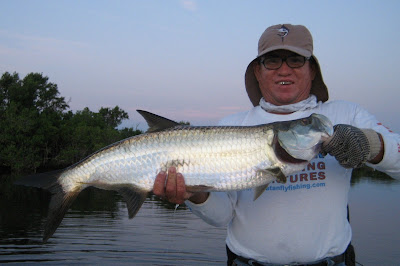 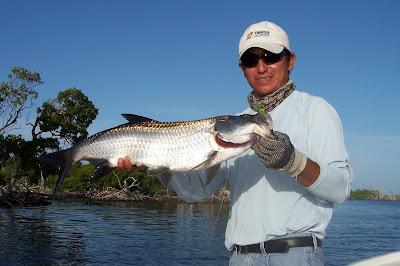 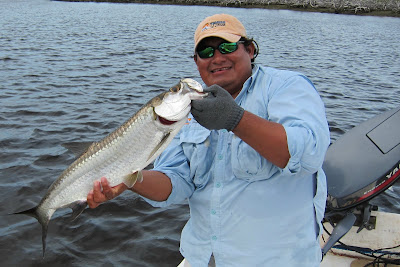 Occasionally though, one of us would jump a surprisingly large tarpon. 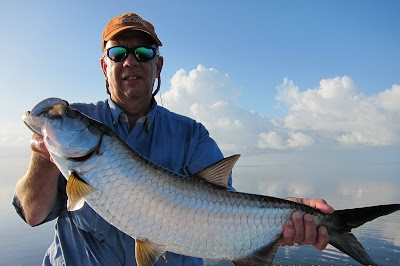 Bob’s surprise in the mangroves 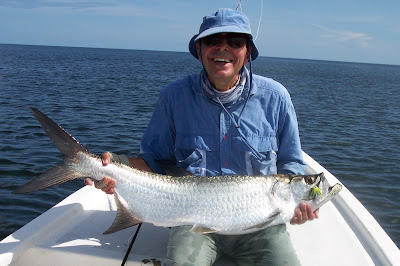 Bill’s surprise on the flats

The showers, thunder, and lightning flashes provoked an interesting discussion one evening. Bill and Gary claimed that if you counted the seconds from seeing the lightning until hearing the thunder that this gave an indication of how far away the lightning struck. Each second indicated one mile. Bob claimed this was wrong. Sound travels at about 1100 feet per second (approximately one-fifth of a mile per second). Therefore, you need divide the time in seconds by five to get the distance in miles. Bill and Gary checked this out upon returning home and confirmed that Bob is right. Now they are trying to blot out the many occasions when they should have been scared but weren’t.

The food at TCL was superb. Beto (who serves as host, waiter, cook, bartender, and tour guide} prepared many luscious seafood dishes along with some local favorites using beef and pork. Baby octopus were in season and were incorporated in several excellent cerviches. 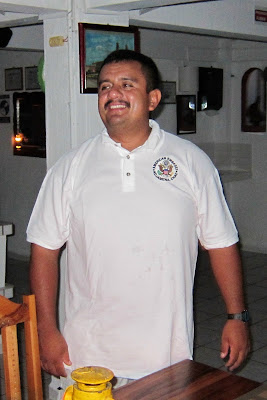 Beto, the Renaissance Man
At lunch one day, Beto promised to prepare his famous Guacamole recipe as an appetizer for dinner. Bob ventured that he had an excellent recipe too. So Beto invited Bob to join him in the kitchen that evening to prepare Bob’s version also. The two versions emerged and Bill and Gary were charged with deciding which was better. They wisely chose to completely consume both versions and declare the competition a tie.

Beto volunteered to take us on a tour after lunch one day, an invitation we gratefully accepted. We drove the waterfront and side streets of San Felipe, visited the nearby town of Rio Lagartos with its swimming cenote, stopped off at a wonderful white sand beach east of Rio Lagartos, and finished with a drive through the evaporation lakes and salt collection in Rio Colorado. We highly recommend this tour if you go to TCL.

While we took an enormous number of different fly pattern with us, we actually used very few of these. For the larger tarpon, we used chartreuse Toads tied on 2/0 Gamakatsu SC15 hooks, Sea Habits in the Sardina coloring tied on 1/0 Tiemco 600SP hooks, and chartreuse and white Rob’s Receivers also tied on the 1/0 Tiemco 600SP. We had some red and white Whistlers along but never got around to using them. 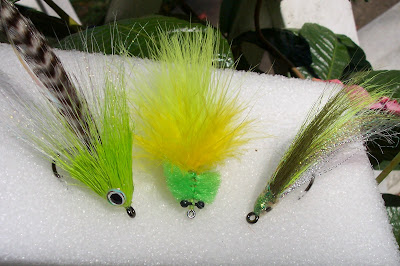 A touch of Chartreuse attracted the larger tarpon
For the baby tarpon in the creek mouths and bays, we used mostly smaller Toads tied on size 1/0 and size 1 Gamakatsu SC15 or SS15 hooks (chartreuse, purple, tan and orange). Additionally we used various colors of Seaducers on 1/0 SS15 hooks and rabbit strip baitfish on 1/0 SC15 hooks. A foam-backed version of a Seaducer with added eyes to mimic a shrimp worked particularly well. 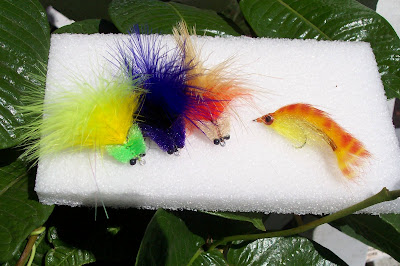 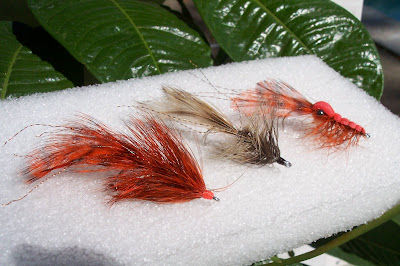 Seaducers
For fishing the flats in the afternoons with the very low tides, very small flies were required so as not to spook the hell out of the fish. The rabbit strip baitfish rode high enough in the water so that it still worked. A foam-headed Toad on a size 1 hook did well as did two of the guide Carlos’ flies – a small black gurgler and a small deer hair slider. If we go back to TCL, we’ll have a much wider selection of very small flies than we took with us this trip. 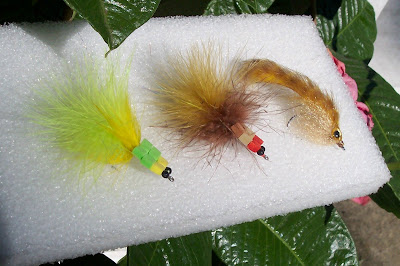 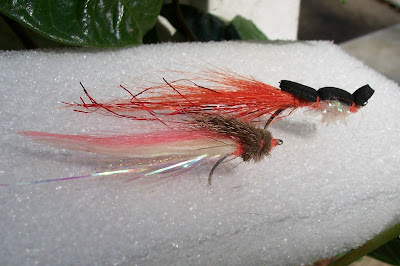 Carlos’ Patterns
As a summary of our experiences, here’s a direct quote from Gary.

‘While I'm not sure who was the bestest or caught the mostest, I can say that I had a great time at San Felipe. As Carlos would always say, I had “good action”. He and I did a lot of fishing in the creeks where the “action” is amplified by the close quarters. I learned a lot about landing tarpon that were leaping over, around and through the brush.

While I thoroughly enjoyed each day, perhaps my favorite was a day with Carlos when we fished to tarpon exploding on bait fish just offshore from some sandy beaches and then went up several creeks to have fish wrap my line around branches.

I'm an anti-fish counter, but the first afternoon I had 17 babies eat the fly, jumped 12 and landed 7. And that's in a few hours of fishing. Of course, numbers are a woefully poor measure of a fishing trip. I had a ton of opportunities to catch fish, fished with some first class Mayan guides that I can call amigos, got to know a little bit about a spectacular marine environment, became friends with a irrepressibly good natured Mayan cook who made the best assortment of sea food that I've ever had, stayed in a little fishing town with no crime and no other gringos, learned new stuff about tarpon and the flies they eat, and enjoyed all of this with two great friends. Now that's a good fishing trip’

What more can we say?” 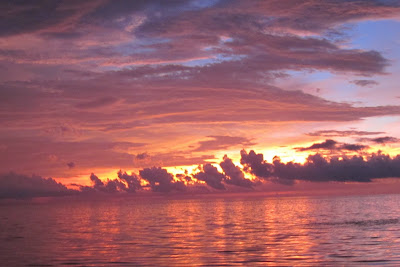 After the showers
Posted by Keith Kaneko at 1:59 PM 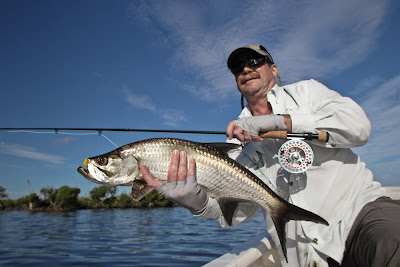 We are excited to have received a few photos from client, writer, and photographer Gary Kramer. This is Gary and his friends' 3rd season fishing with us. Gary is a renowned outdoor writer/photographer that is continually published in almost every major outdoor sporting publication. Over that past couple of years, Gary has published articles about Tarpon Cay Lodge in Fly Fishing in Saltwater titled "Yucatan Yearnings" (Jan/Feb. 2010 issue) and in Gray's Sporting Journal titled "Tarpon Reclinado" (April 2010).

This past summer, Gary and his group returned to Tarpon Cay Lodge and had stellar fishing for baby Tarpon. They reported many shots at Tarpon each day and, once again, thoroughly enjoyed the entire experience. Thanks again Gary and friends! We look forward to your return visit next season... until then, Fish On! 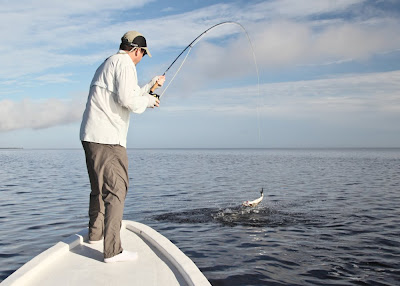 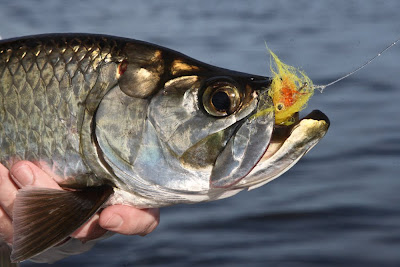 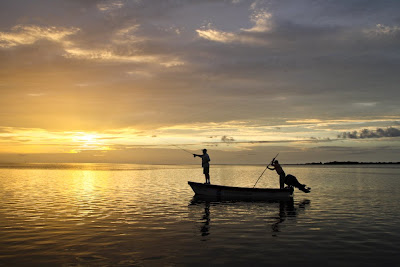