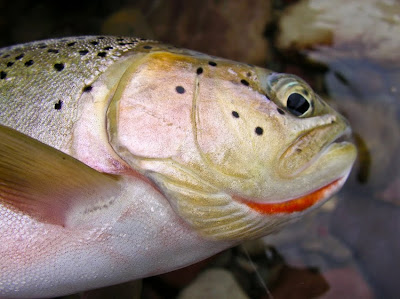 I am excited to announce that Angling On The Fly will be hosting a float trip in 2011 on one of Montana's premier dry fly fisheries, the South Fork of the Flathead River. The South Fork flows through the Bob Marshall wilderness and is home to incredible numbers of native West Slope Cutthroat that rise to a dry fly with vigor and Bull Trout that reach massive proportions. This is a full service, multi-day float trip outfitted by Paws Up Outfitters - they are renowned for offering the finest camp experiences in the wilderness. The remote headwaters are reached on horseback, where we will begin floating and fishing up to 50 miles of river during the week. Best of all, Paws Up retains the special permit to operate on this river and this means a week of fishing and camping in solitude.

I have personally made this float trip with Paws Up and was completely captivated by the entire experience. The scenery was breathtaking, while Paws Up provided unparalleled levels of service and amenities at camp. And, the fishing was... honestly, the absolute best Trout fishing I have ever experienced. The "catch-rate per day" was incredible and I was most pleased with the variety of methods that could be used to entice the Trout. Even more, it was exciting to be able to pursue Bull Trout - some of which reach double digit weight. So, I hope you can join me on this amazing wilderness adventure in 2011! Below are the trip details:

NOTE: "Non-Guided" option receives all of the same services and amenities in camp - full staff service, camp setup/takedown, cooking/meals/beverages, etc... but you and your fishing partner would row your own fishing raft during the day. The South Fork is not very technical river to row and much of the best fishing is done while wading (use the raft for transport and fishing down the river).

Good Fishing to All,
Keith 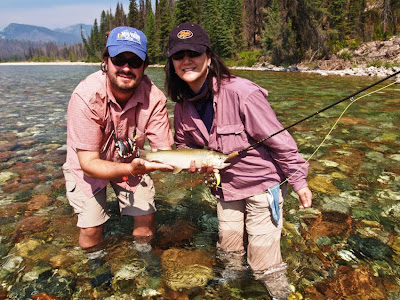 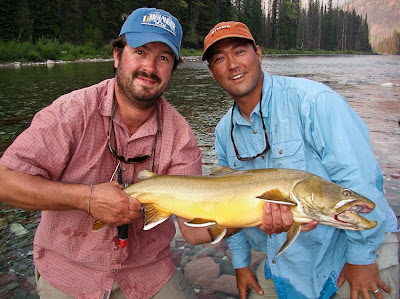 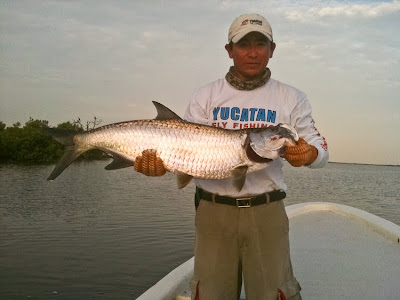 Guide Cresp displaying one of Jon's 51 baby Tarpon landed at Tarpon Cay Lodge
We just received a fantastic fishing report from repeat Yucatan customer, Jon H. of San Jose, CA. For the past few years, Jon has made bi-annual trips to Tarpon Cay Lodge and/or Isla del Sabalo to pursue Tarpon. He is an avid Tarpon-holic, as he also makes multiple annual trips to the FL Keys to pursue Tarpon and other flats species.

Well, Jon just returned from a great week of fishing at Tarpon Cay Lodge. Despite the unseasonal windy conditions at San Felipe, he still managed an impressive 51 baby Tarpon landed in a week of fishing. Even more, he said that he jumped and lost equally as many throughout the week. Wow, impressive!

Unfortunately, the windy conditions did not provide an opportunity to successfully pursue the migratory Tarpon last week. This seems to have been a common theme across the Gulf and Caribbean this past spring / summer. Once this wind lays down, the fishing should be excellent. August is normally the lowest wind month, so we have our fingers crossed for some stellar reports on the big Tarpon next month.

Well, thanks again Jon for checking in with us and giving us a nice report about your fishing success at Tarpon Cay Lodge. Good fishing to all and Fish On!
Posted by Keith Kaneko at 12:37 AM 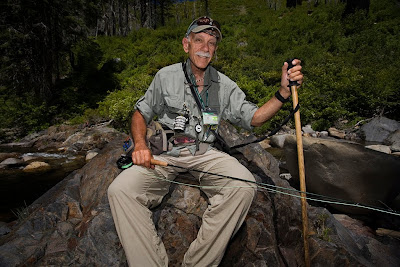 Here is a great mini-article written by guide and signature fly tier, Bill Carnazzo. Bill guides on the following Northern California premier Trout fisheries:
He applies short line nymph fishing tactics on all of these rivers and has written a very informative piece about this technique. Here it is...

General points. Short line nymphing is a highly effective method for fishing pocket water—but it requires “paying your dues” in order to master its many nuances. This means a lot of patience and practice over an extended time. There is no silver bullet and no substitute for putting in the time on the water. Once mastered, the short line technique will become intuitive. What follows is a brief description designed to keep it simple.

Casting technique. Begin with about 3 feet of fly line outside the top rod guide. This means that you have 3’ of line, about 9’ of leader/tippet, 9’ of rod, and 3’ of arm length (plus all the distance you can lean forward) to work with. That’s at least 24 feet, enabling you to cover the water by fishing close in or farther out. Toss the rig downstream so that you can use “water load” to assist you in making the cast, which is a simple roll cast directed at the point where you want the flies to land. Do not try to execute a regular back/forward cast as you will end up with messy tangles and lost fishing time. Once the line is downstream, raise the rod to the vertical position, take aim, and make the roll cast.

Angler position to target. Angle the cast 45 degrees upstream—in other words, your target position for where the flies land needs to be ¾ upstream. This, of course, will determine where you position yourself in the stream. Remember: the short line technique always begins with an upstream cast. Don’t worry about the flies splashing down and making noise; ambient noise in pocket water is always present, and fish don’t generally spook when flies are tossed into the pocket. 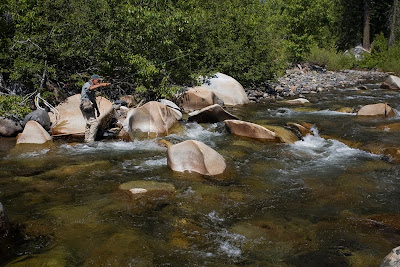 Trip Report and Photos: Beyond the Blue - South Caicos Bonefish

Mike lands a trophy South Caicos Bonefish...
I recently received an excellent trip report and this selection of photos from last month's group trip to Beyond the Blue at South Caicos. The group had the opportunity to fish a variety of environs, from inland creeks / lakes to the pure white sand flats. In addition to numbers of Bonefish being landed, they reported some trophy Bones were landed too. Thanks Ron, Dick, George and Mike for a nice report and photos!
Guide Ganger (aka "G") and Mike point to a school of Bones on the flats...
George presenting the fly to Bonefish in an inland creek...
Mike hooked up on a "Grey Ghost" in the creeks...

Dick lands a typical SC Bonefish on the flats...
Dick connects with a "reel-screamer"

George battles a SC Bone as guide G looks on...

Dick makes a long-distance call for Bonefish and it answers...