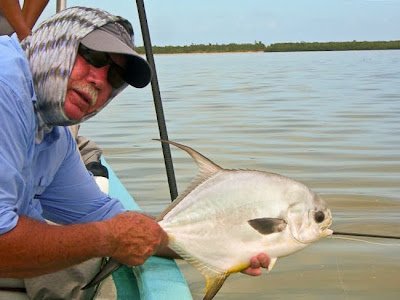 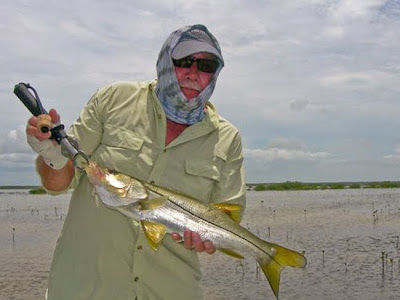 Jim and his Snook landed in a shallow lagoon...
Posted by Keith Kaneko at 9:54 PM

Robert lands a jumbo baby Tarpon at Isla del Sabalo
We just had a couple of stellar Isla del Sabalo reports come in from repeat customers, Monty (Naples, FL) and Robert (Billings, MT). Both of them fished the Yucatan with us last summer and decided to fish with us again this summer. They reported a "great time, weather, fishing and people were great." Most of the fish were around the bocas (mouth of rivers) and along the shoreline flats. Most of the baby Tarpon were 10 - 12 pounds, but there were some that topped 20, 30, and even 40 pounds! The HOT flies were the Puglisi Tarpon Streamers in hot orange and yellow, or purple and black (size 2/0). Thanks Robert and Monty for the continued business and we look forward to your next trip in summer of 2011!
Posted by Keith Kaneko at 8:40 PM 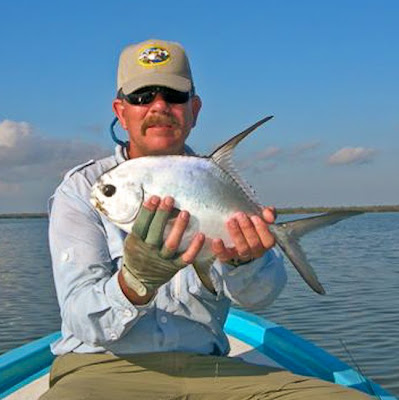 Here is a nice testimonial from long-time customer Ed B. from Sacramento, CA:

Keith,
Isla Blanca! Once again I find myself wishing I was still there. As you know I went twice this year. In June with "new to the salt" friend Bill and in July with Jim. After all, what's not to like about fishing Isla Blanca? It's a relatively close destination, the guides are great and the fishing is varied. If the fishing is off for one species, you can chase another. A few times it was too windy to effectively hunt Permit and Bones on the flats it the morning, so we chased Tarpon and Snook in the quieter back country. We still got in our shots on the flats later in the day when the wind calmed. Sometimes there is some unexpected by-catch as my friend Bill poses with a Pompano which grabbed his crab after a nice cast into a pod of feeding Permit and I landed that Cuberra Snapper blind casting to pockets for Tarpon. No vast numbers of fish were caught on either trip but each day had its points of excitement. This year seemed to be a bit persistent with thunder storms and did get caught in a few downpours. One morning, during a light rain, wondering what kind of fishing we would have, our guide got us into a group of baby Tarpon frantically feeding on baitfish. For at least 20 minutes Jim and I cast to this group boating two each and jumping many more. The last afternoon, Jim and I were on one of the close large flats and many small groups of Permit began to show... At one point I counted 8 spots of nervous water around us with in 100yds. At first the water was barely 2' deep and the fish seemed to spook when someone said "Permit!" You couldn't even start a cast at 80 feet. As we got a little deeper, with allot of finger biting, crouching low and even the guide getting down from his perch and polling from the boat bottom, their spookiness lessened and Jim was able to score on a nice 23"-5.5 lbs.

Once again, thanks for the service, Ed Bielawski 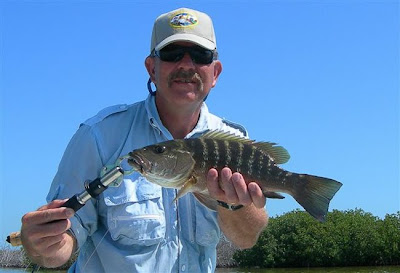