Trophy Bass at Lake El Salto (angler - Jim Christensen)
A group of 8 avid anglers met up in Mazatlan to embark on a spring pursuit of Mexico’s trophy Largemouth Bass. From Mazatlan, we headed northeast to the base of the Sierra Madre mountains. With the beauty of the towering mountain ridgeline as a backdrop, we arrived at Anglers Inn on Lake El Salto. This lake is renowned in the world of bass fishing as the epicenter for many of Mexico’s largest Largemouth. 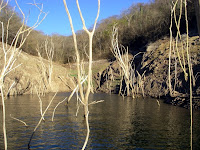 Upon arrival, the first observation of the lake is has been experiencing significant draw-down. This is the heart of the dry season in this part of Mexico, and the water demands for agriculture such as corn, agave (tequila), tomatoes, etc. is great. Many of the anglers in our group had only seen the lake at full pool during the fall or winter months. Compared to that time, the lake had undergone a draw-down of more than 30 feet. Despite this lower water level, there is still structure abound, and probably more than when the lake is at the max waterline. 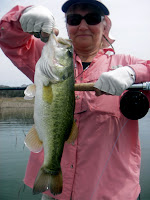 Also, this time of the season is post-spawn for the bass. After a month or so of spawning activity, the bass are ravenous and a back in the mode of predatory pursuit,… a bad time to be a baitfish of mouthful proportions. At the day’s end, it was exciting to hear the eyewitness accounts of bass busting up shad and tilapia on the flats and along rock walls. A variety of baitfish subsurface and topwater patterns were successful this trip. While some staple patterns worked well, we also experienced success on different colors and patterns that had not been fished prior. This is always the fun of our great sport of fly fishing,… trying to “unlock-the-code” of the week’s fishing. In the world of trout, one says “matching-the-hatch”. However, at El Salto it is more a matter of “imitate-the-bait”.

In some areas of the lake, the bass are keyed in on Tilapia. This commercially harvested species breeds like a guppy and grows quickly. This abundance of Tilapia provides a continual feed factory for the bass. Although this species is an omnivore, it primarily feeds on the algae growth on rocks. One of the most exciting scenes is to see trophy bass mauling small tilapia along a steep rock wall. At times, water explodes up onto the wall some 4+ feet or so. 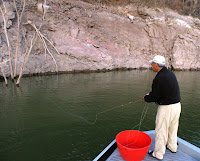 This leads to a further discussion of “rock walls” at El Salto. When I first began fishing El Salto, I was always amazed that guides had us topwater fishing along these sheer rock walls. Often, the depth of the water along the face of the wall was 15, 20 and even 30 feet deep. When fishing topwater, one does not envision fishing water depths this deep and being successful. But again, the presence of Tilapia feeding on algae growth on the wall explains why these bass cruise the face of the rock wall to pick off unsuspecting Tilapia. Some of El Salto’s largest topwater bass are landed in this environ. 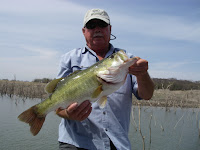 Another baitfish that El Salto bass feed on is shad. This nickel bright baitfish is abundant in some areas of the lake. In these areas, I have experienced El Salto bass getting “selective”. When the bass get one-track-minded on shad, fly profile, size, and color seem to make the difference between the fly angler being a player or just a spectator of trophy bass busting bait balls of shad.

Although we caught decent numbers of bass each day, a cooling trend occurred just prior to our arrival. This seemed to affect the aggressive bite that normally occurs during this time of the season. The lodge staff mentioned that the air temps were at least 10 degrees cooler than normal and, consequently, the waters temps had cooled a few degrees as well.

Despite these conditions, our group still landed a number of trophy bass, both on topwater and subsurface flies. And once again, El Salto veteran fly angler, Jim Christensen, earned “big fish of the week” with a behemoth bass that almost went 9 pounds. In addition, there were a number of trophy bass landed in the 5 – 7 pound class, many of which were fooled with topwater offerings. 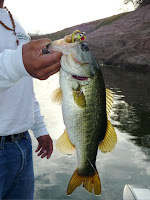 Most of the group fished topwater with the Sage Largemouth BASS rod (330 grain). The group fished a wide selection of rods for subsurface fishing. Some of the rods that were a standout on this trip were the Orvis Helios rods and new Redington CPX. I am continually amazed at the advances in rod design and engineering. These light-in-the-hand rods are a joy to fish all day long. 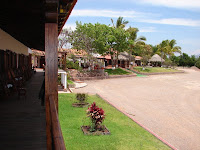 Finally, this trip report would not be complete without the praise for the incredible service and staff at Anglers Inn. Once again, our group was overjoyed with the hospitality of the friendly staff and the scrumptious meals that were served. Anglers Inn truly exemplifies the benchmark for lodge service, accommodations, and overall quality of experience.

We are now anxiously anticipating our return to Lake El Salto and Lake Mateos in the fall this year. We have a few hosted trips already on the calendar for December of this year… prime weeks for topwater fishing! Until then, we will be working at the vice to build poppers and tie the fall patterns for Mexico Bass! Fish On!
-Keith 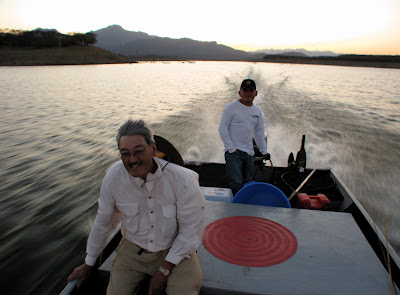 On the run for BIG Bass! 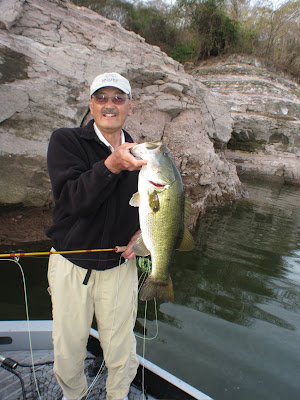 Dad with a trophy Bass taken off the rock wall... topwater! 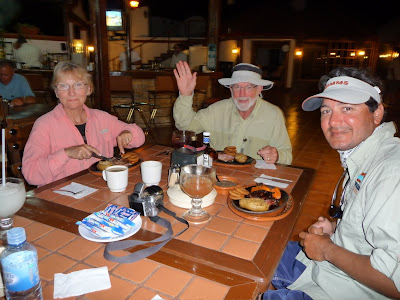 Joan, Steve, and Marco are all smiles about a filet mignon dinner! 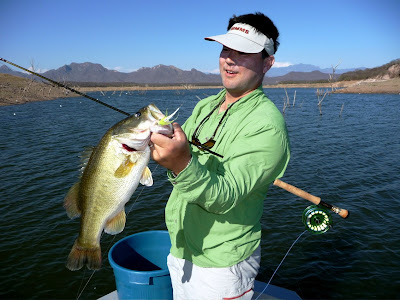 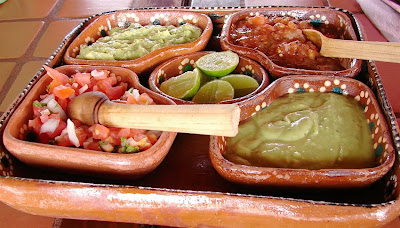 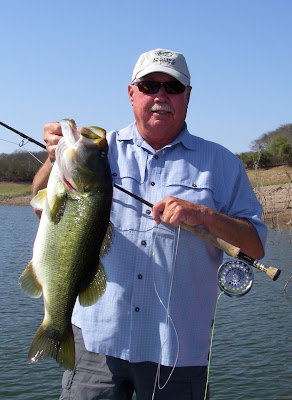 Jim with one of many trophy Bass... 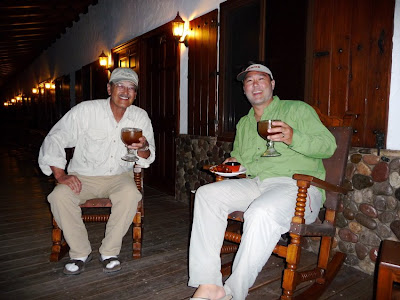 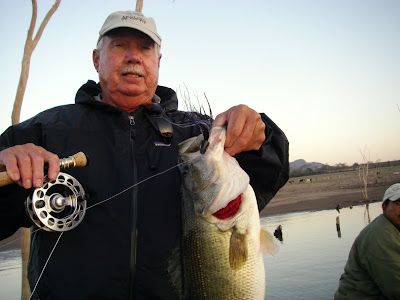 Jim with half of his 8+ pound Bass showing... too big for the camera! 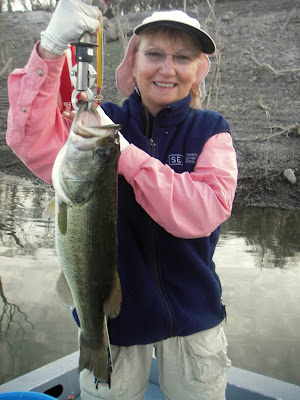 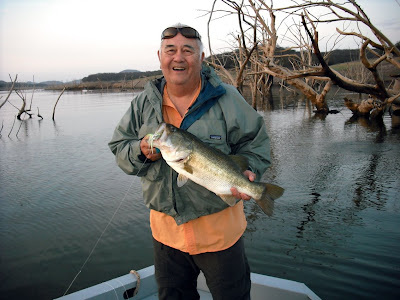 All smiles for Leo and one of his trophy Bass! 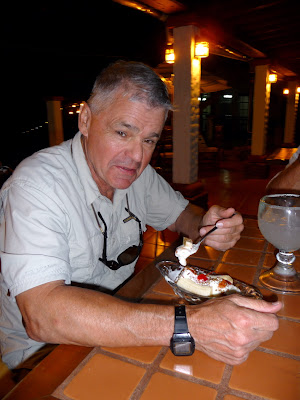 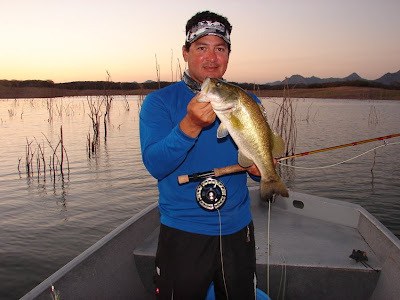 Marco with one of many topwater bass landed at dusk... 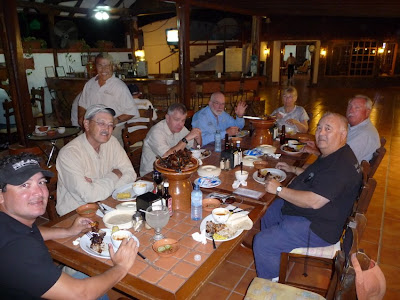 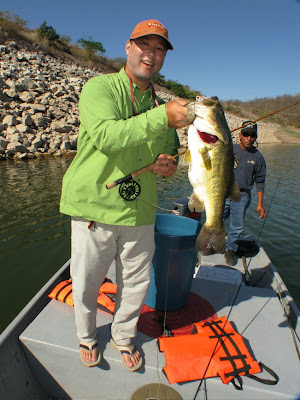 Topwater trophy landed along the rip-rap at El Salto 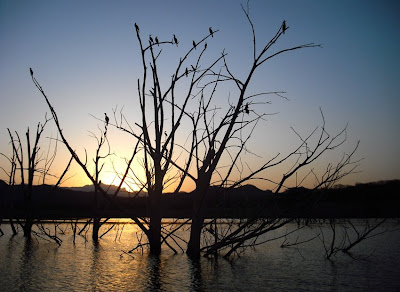 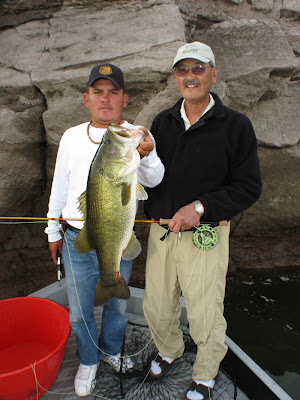 Dad with guide "Chi Chi" and another trophy topwater bass...

This shot is just a teaser for tomorrow's full report from our El Salto trip. I have a lot of good information to blog, as well as more pictures from our trip (including Jim Christensen's behemoth LMB). Good fishing to you!
Posted by Keith Kaneko at 11:24 PM 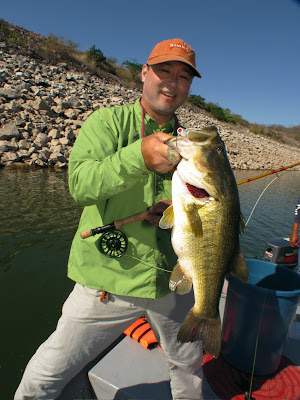 Pultz's Poppers produce... BIG TIME!
I am excited to share a popper with you that is now a staple for Largemouth Bass here at Lake El Salto. More than a year ago, a NorCal fly tyer name Neal Pultz approached me at the Bass-n-Fly expo. He introduced himself and then proceeded to show me a selection of poppers that he had designed and 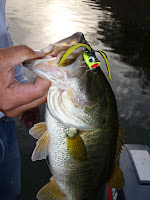 handcrafted himself. My jaw dropped in awe of his fine craftsmanship with balsa wood and paintwork. I immediately told him that I MUST fish these patterns... and soon.

Being a topwater fanatic, I am always on the lookout for the best flies for fooling trophy bass on top. And Pultz's poppers were one of the first "available for sale" poppers that were perfect for the behemoth size and power of El Salto Largemouth. They produce a nice audible "bloop" sound that drives bass crazy. Neal also utilizes a loop style weed guard that works like a charm. It has proven to be highly effective when fishing around, over, and through the myriad of wood structure here at El Salto. My favorite color on this trip was black scale with chartreuse body (images below).

I will post a more detailed and technical post on his poppers when I return from this trip. Fish On! 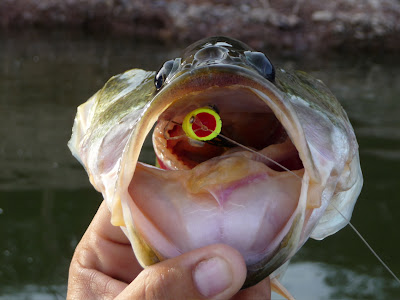 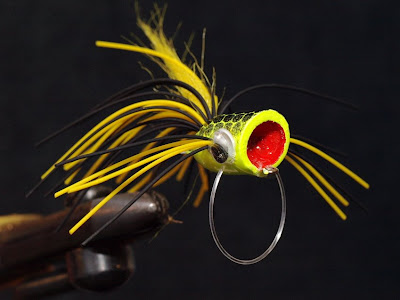 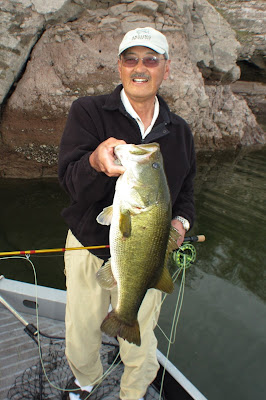 I am now in Mexico at Anglers Inn on Lake El Salto. This is truly a special trip for me since my father, George (AKA "Jorge" while in Mexico), has joined me for a few days of bass fishing. A father/son fishing trip is always a good time filled with laughter and reminiscing about the good'ol days of fishing together. Throughout my youth, Dad introduced me to fishing and the great outdoors. Now, it is nice to share the experience of destination fishing with him here at Lake El Salto. We have been enjoying the wonderful hospitality at the lodge and, of course, are having some good action for trophy bass! Topwater has been good in the early morning and evenings. Midday, we are fishing subsurface to stay in the action.

For topwater, the group has been doing well on Neal Pultz poppers (chartreuse/black), Gurglers (black), Bubble-Heads (silver/gray), Leo Gutterres' El Salto Special (silver), and Crease Flies (silver). Most of us in the group have been fishing the Sage Bass rod (Largemouth - 330 gr.) - an incredible tool for top water fishing here at El Salto.

Next, the best producing subsurface patterns have been the Flashtail Clouser (brown/yellow/white or all chartreuse), Gummy Minnow, and Hare Grub (olive). We have been fishing the following fly lines for subsurface fishing: Rio Outbound Short with clear intermediate tip, SA Mastery Streamer Express clear tip, and Rio Outbound type III.

Well, it is time to sign off for now... we are headed out for the afternoon session of fishing. I will blog again tonight with more fishing action from Lake El Salto... Fish On! 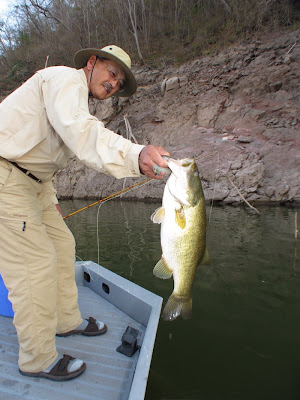 "Jorge" with another topwater trophy!
Posted by Keith Kaneko at 12:36 PM