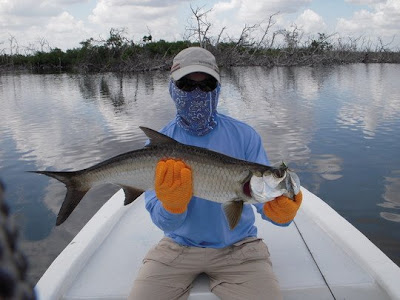 Jon with one of many baby Tarpon landed at Tarpon Cay Lodge last week
Here is a recent trip report from Jon H. of Cupertino, CA:

"Fishing for the babies was better than I hoped for. Cresp (guide) said the average size we caught was larger than normal. The fish I caught a couple years ago averaged around 6 lbs and this week's averaged close to twice that. The first day, with the morning wind, we stayed along the mangroves, came back for lunch and went back out at 4:00 P.M. I count a fish as being caught when the leader is in the tip top (Keys tournament style). My guide in Florida got me to do this and I usually pull harder after that, hoping the fish will come off and will not have to be handled. Anyway, by that count, I had 26 fish on and landed 17, plus a couple catfish and barracuda.

Day two started not too bad so Cresp made a run for the deeper water (for migratory Tarpon) but decided to turn back after wind and swell picked up rather quickly. Checked out that hole closer to shore but no fish there. A couple years ago, they were thick over that spot. So, we fished for the babies going 9 for 14 (anchored in one spot) before heading in for lunch and 7 for 17 after 4:00 P.M. I also caught a couple of snook.

Day three started out with not much wind so we made the run in the larger panga to about four miles off shore. We saw three schools and hooked a fish out of each school. On the first school, the fish was at boat side when the hook pulled. Cresp estimated the weight at 70 lbs. The other two fish provided a few jumps each and got off. Cresp checked the hook and the point was rolled a bit either by the second or third tarpon. Fishing for babies was slower this afternoon with the wind and high water, went 5 for 7.

Day four produced a school larger tarpon moving away at about 300 yards. The weather was perfect that morning. Back to the babies going 6 for 12. The wind came up and switched around to the NE. Average size remained at 10-12 pounds. Switched from using toads to a couple patterns used in the Keys, which were eagerly accepted.

Last day, we tried to find the schools (migratory Tarpon) again with no luck. Back to the babies, high water and north wind (not ideal). Went 7 for 20 (baby Tarpon).

These fish, even the larger tarpon, are ready to eat anything thrown at them. I wanted to try using crease flies on the big schools but they never gave me the chance. There's always next year...

The meals were very good, the most outstanding being a whole steamed snapper and the super, deep fried snook. My room was always well maintained and clean. The staff always checked back with me to make sure everything was OK. New roll of toilet paper every day??? Now that's service!

I'm looking forward to going back again next year!"

Thank you Jon for this detailed report and good fishing to all! 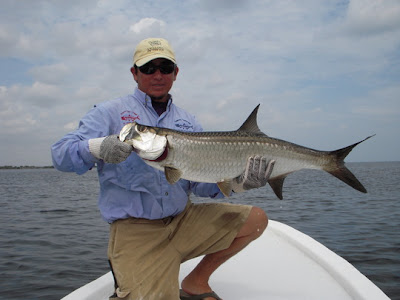 Guide Cresp, displaying one of Jon's trophy baby Tarpon
Posted by Keith Kaneko at 11:52 AM