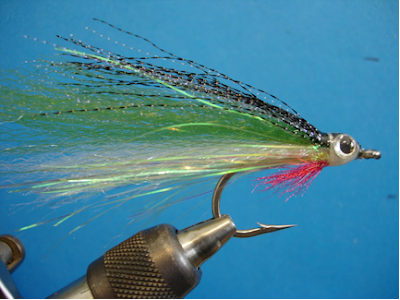 HOT FLY for Lake El Salto Largemouth Bass (photo by Bill Carnazzo)
Earlier this month, we had a group of 8 fly anglers return from renowned Anglers Inn at Lake El Salto in Sinaloa, Mexico. The group was hosted by Bill Carnazzo, master fly tyer and fly fishing guide. During this trip, Bill had incredible success with a baby bass pattern he devised for this fishery and its trophy Largemouth Bass that prowl the depths. Bill says that the best retrieve with this fly is a strip-strip-pause sequence, with the bass often inhaling the fly on the drop during the pause. He was fishing the Rio Outbound Short with clear intermediate tip and says that the contrast of the clear intermediate transition to the belly (white color) is the best "indicator" for the subtle grabs. Bill reported that often he never felt the grab, but intently watched the line transition for the soft grab by BIG Bass! Read below for tying recipe and instructions for this highly effective fly.
Recipe for Bill’s Baby Bass
Materials
Tying Instructions
Tying Tips