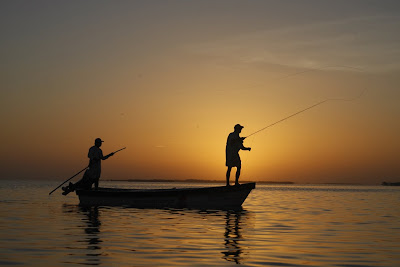 Below is a recent report from renowned writer / photographer Gary Kramer who fished at Isla Blanca and Tarpon Cay Lodge earlier this month.

"I recently returned from 3 days at Isla Blanca and 3 days at Tarpon Cay. The weather got us at Isla Blanca - a tropical storm moved into the Yucatan and the skies were gray and it rained - at times it was relentless. Despite the weather we had good luck with the baby tarpon - in the 5 to 12 pound class. The best fishing was in the mangroves were we

jumped at least a dozen fish between us per day. Our guide Luis was first class and did everything in his power to get us into fish. The third day it cleared and for the first two hours the conditions were perfect for permit - sunny skies and glass smooth water. We found two pods of fish - the first one was 5 or 6 permit and while I got a shot, the fish refused the fly. The next shot was better - it was at three fish and my buddy Alan Sands hooked and landed his first permit - about a 4 pounder but a permit none the less. Then the wind came up and we switched to baby tarpon in the mangroves and had our best day overall. The all inclusive Blue Bay Resort had good food and is close to the launch area. The equipment and boats were all first class.

Then it was on to Tarpon Cay in the small fishing village of San Felipe. The lodge was basic yet clean and the food good. Here the weather was much better - calm every morning with the wind coming up in the afternoon. We fished for the big boys (migratory tarpon) two mornings - saw a bunch of fish but they were moving fast. One of my buddies caught a 25 pounder and we had a big fish flash on a fly - at least a 75 pound tarpon. But the real action here during my stay was for baby tarpon - 5 to 15 pounds but more 10 to 12 pound fish than any anything. Lots of action - jumped a dozen fish one morning and almost as many in the afternoon. Classic stuff - sight casting to rolling tarpon - the chase, the blow up and the jumps!! Overall it was great trip! - Gary Kramer" (all photos by Gary Kramer - www.GaryKramer.net) 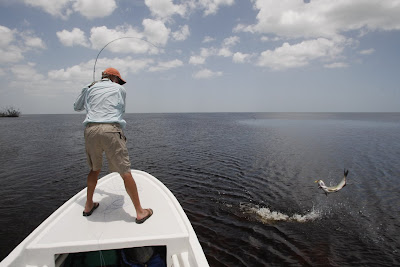 Jumping baby Tarpon on the flats... 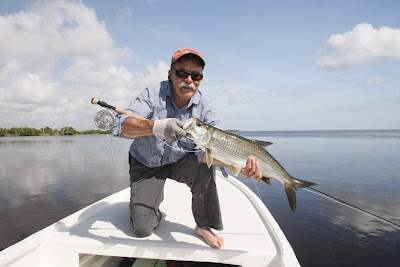 Gary with a typical baby T at Tarpon Cay Lodge...
Posted by Keith Kaneko at 12:23 PM