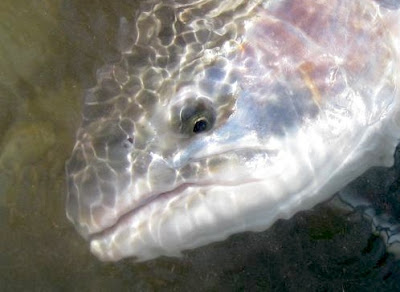 Skeena Chrome...
Here is a fantastic report and a few photos from our customer, Carlo Proto, about his trip to British Columbia while fishing with Nicholas Dean Skeena Camp.

"My fishing buddy Don Powell and I had one of our best fishing trips ever when we attended the Nicholas Dean Skeena River Camp August 7 - 13, 2011 in Terrace British Columbia operated by Dustin Kovacvich . It was a dream trip. We were set up to for success right from the start. We camped on an island in the middle of the Skeena River in B.C. The Skeena is the highway for Northern B.C. steelhead and salmon. The Morise, the Kispiox, the Babine and the Copper are all tributaries for the Skeena. The camp had all the comforts a serious fisherman could imagine. There were 5 guests in the camp and each had their own tent. The tents had a cot and a new sleeping bag was provided. We took our meals in a large cook/meal tent, and the food was prepared perfectly by an expert chef. The meals were tasty and there were generous portions. In addition there was a large equipment tent where we could store our coats, vests, and other fishing paraphernalia. There was also a fly tying station where the fly of the day could be created. Everything we needed was anticipated by the staff of Nicolas Dean Lodge. We even had a shower and an outhouse. After settling in late Sunday afternoon one could only think, “Man this is cool, let’s go fishing”, and that is exactly what we did.

All of the Nicholas Dean camp preparations allowed the guests to fish 15 hour days if we chose to and some days we chose to. We got up early and fished before breakfast. On the way to the river we picked up a cup of coffee or tea from the cook tent. We fished the early morning and the camp staff anticipated our needs and brought breakfast & lunch to the river. At lunch time the second day I did not want to stop fishing as I had not hooked a Skeena River Steelhead, so Dustin being a gracious host asked me if I wanted to eat my burger while fishing. I accepted the offer and half way through the burger I hooked a nice sockeye.

The attention to detail by the Nicholas Dean staff allowed Don and I to concentrate solely on our fishing. Both Don and I are into learning more about swinging for steelhead. Don has been there 11 times and this is my 4th B.C. trip. We got lots of expert advise from the guides and picked up tips from Dustin and Sky who are two of the best steelhead fishermen I have seen fish. We also were supported by Al & Yvan two other fishing guides that provided expert help. It is said that steelhead are a fish of a 1000 casts, For Dustin & Sky steelhead seem to be a fish of 80 casts. In working with these two experts I learned once again they are very fishy people because they pay attention to and notice little things going on in the water. All the little things add up to make big differences. I learned so much because they pointed out details and when asked they demonstrated techniques that produced on the water results. They do not just talk about catching fish they make it happen. A picture is worth a thousand words below are some photos of the first week of the Nicholas Skeena River Salmon Steelhead Camp. - CP" 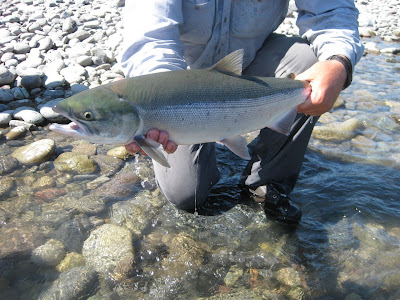 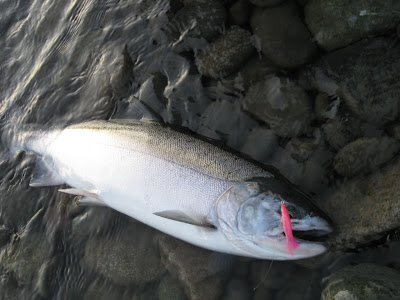 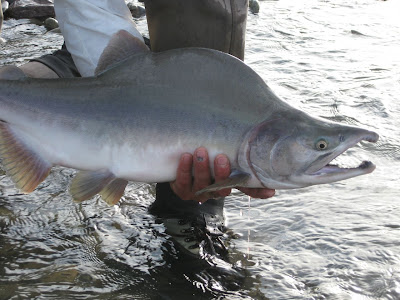 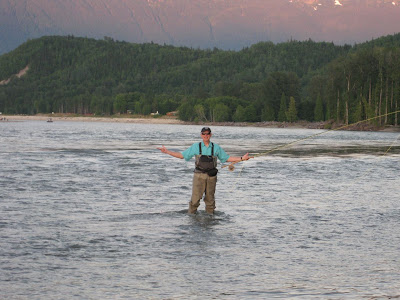 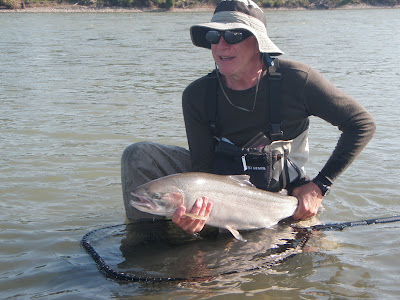