This trip to Skeena country marked my second venture to chrome-land. I was joined by my good friends, Steve Pereira, Rob Elam and Joe Carlig. In addition to this was the welcomed company of Steve Jones, Dan Brosier and Kevin Mather. As guests of Nicholas Dean Lodge in Terrace, BC we were there to tangle with the infamous grey ghost. We were there to see chrome, but knew too well that tangling with a sea-going Walter was not a given. For the most part we knew how to appease the steelhead gods. After many in depth meetings about how to keep them happy we agreed that we will not expect it to happen, let the fish come to you and embrace the Grand Unified Wou (GUW) (thanks to Dan and Kevin). The GUW is an all encompassing way of life that when followed will be unquestionably rewarded with your desired outcome.

The flights were cake, Chad and Noel were there to greet us and take us to the Yellow Cedar Lodge. The lodge is incredible. It is near the Skeena and surrounded by mountains. On site was a hot tub, weight room, lounge and spacious rooms. The food, service and accommodations were excellent. The picture to the left is the view from the lodge deck.

Blue skies in British Columbia during October, that is GUW!

Day 1: Steve Pereira and I had a chance to fish the Upper Copper. He took us to a

remote part of the river that was worth every ounce of energy expended. The hike itself was unreal with a bounty of nature eye candy. When we got there we were met with clean water with a tint of steelhead green plus great pools and runs. We were successful. Steve and I started out with dry flies (yes, big steelhead on dies in October) and both drew blanks on the first run. I went back through with a

pink Jumbo Critter and a little T-14 and found a nice buck! 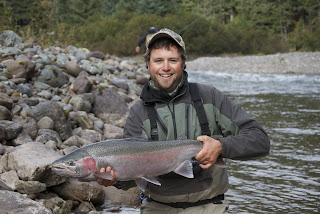 The next pool we went to was one of the most incredible pieces of water I have seen. Its speed was mild, bottom strewn with boulders and multiple seam lines. There was also a few mayflies hatching... Back to the dries we go, Steve was working through the run very well while I watched him. Out of the corner of my eye I happened to see a 10-15 pound steelhead eat a mayfly. I took the liberty of positioning myself to make the presentation. I was casting a size 4 dry on a 14' spey rod... I barely got the floating head out when I get a looker out of the rocks. I goofed and mended right when she came up to look,... DOH! As soon as the fly gained dead drift status it was annihilated by this: 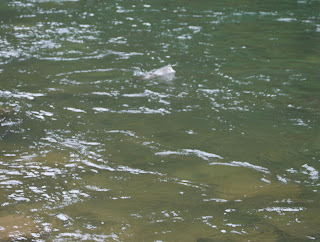 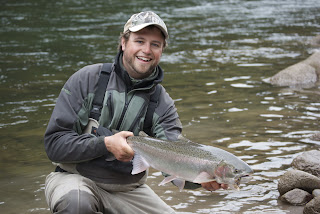 While I was fighting this beauty the big boy I had seen earlier ate a dry right in front of me. So I landed this one and had Steve come up and give it a go. He starts bombing casts and getting great drifts to this fish... no dice. I followed and skated/grease lined the dry in a last attempt to get this fish and just as I was going to call it, BAM. The big guy eats... bing, bang, boom big head shakes and then it was over. Hook bent out... So it goes.

The other anglers will have to tell you their own stories, but here is the summary. Kevin and Dan floated the Copper and crushed. Several grabs, several landed and a full acceptance of the Gran Unified Wou. Here is the pudding: 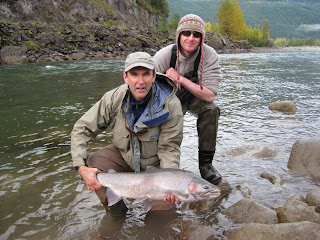 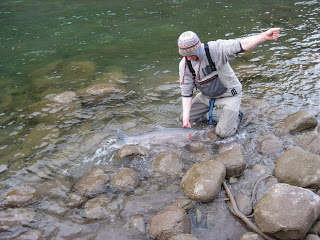 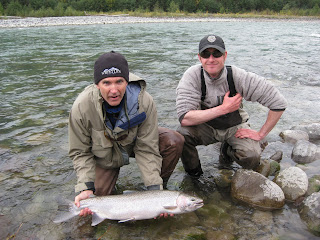 Copper Rocket
Steve Jones, went in pursuit of chrome Coho and was rewarded. No pictures of this, but the quote of the day came from me asking him how his day was. "It went well, I lost count."

Joe Carlig and Rob Elam fished the Kalum hard and really enjoyed the river. The Kalum is known for its large fish and spectacular water. It is a casters delight with high risk and high payouts. This river eventually gave us the love.
Day 2:
Steve P. and Joe Carlig did the float on the Copper while Rob Elam and I were on the Upper

Copper. Each Copper team drew a tough card that day. Local mountains shed recent snow fall and we watched the river rise and blow out! DOH - Rob and I worked very hard and fished only one pool due to water conditions. Rob got it done, first fish came on the 5th pass while the second came on the 9th pass. Down river the boys were sadly shut out. Not even a peck, we were all very surprised and a bit disappointed the lower Copper did not put out. Here are a few of Rob: 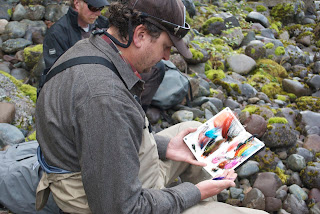 Hmmm, which one? Funny, it doesn't really matter. 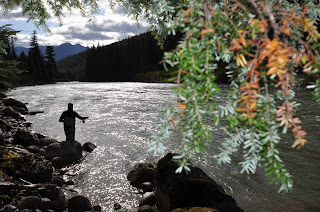 Artsy, yours truly working the run 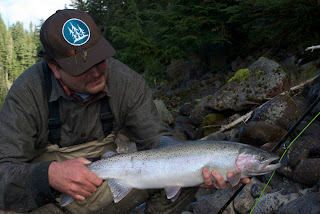 Nice hen, had the hops 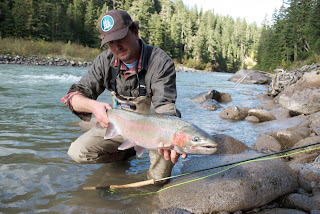 Day 3: Joe and I were on a mission to get Joe his first BC steelhead. We were paired up with Jeff

for a hike on a tributary to the Skeena. This place was once again spectacular with pools and runs designed by steelhead gods. It was not long before Joe had done it... He hit two awesome fish that day. We had a ball trudging through the forest, crossing huge log jams and fishing great water. We saw wolf, bear and moose tracks everywhere.

While chanting the versus the GUW I received a little tug. A dandy in my book.


Steve Jones fished a different trib to the Skeena and he too popped his BC cherry. He had a great day wresting with some true steel. 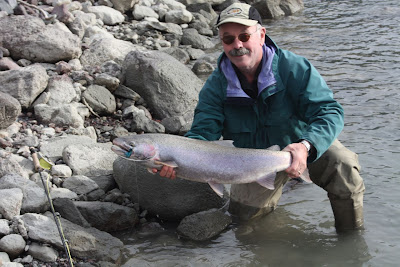 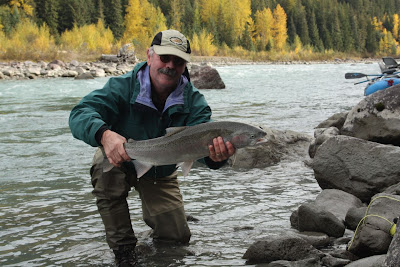 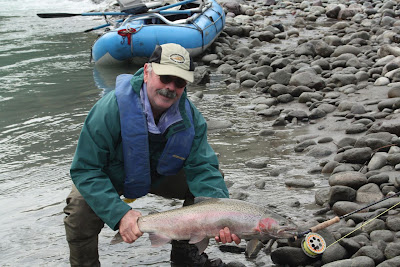 Brute
Rob and Steve P. had an awesome day on the Kalum. They were swinging for steelhead and found their counterpart... COHO. They got into some massive silvers on the swing. Steve had never really used a spey rod before and not only did he stick fish with it, it also landed some by himself. 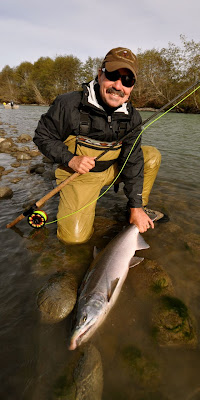 The Dynamic Duo, Dan and and Kevin were on the Kalum and had one of those days. These two "fisherman" skewed the law of averages by managing to go 0 for 12 on fish. We are not sure how many were steelhead versus coho, but that has to be some kind of record. We made sure to bring this up whenever appropriate, so always. Nice job boys.
Click here for images and stories from day four. Here is one the highlights from day 5. Steve Jones with a spectacular specimen. I was very happy for him, he nabbed this with a single hand on the Kalum, very impressive. 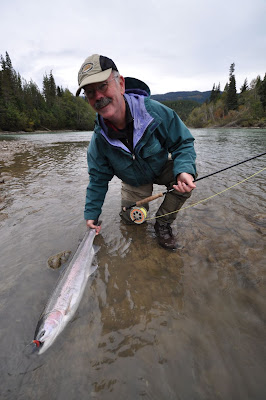 Day 5 for Steve P. and I was truly something we will both never forget. The fishing was good, but the scenery was choice while we rafted down one of the coolest rivers I have ever seen. Images are on the next post. I cannot share too many details with you on this for Sky will surly hunt me down. Also, that is just bad for GUW.

The week in British Columbia was spectacular. It was filled with great people, great fishing, perfect accommodations, a great booking agent, hard working lodge staff and guides. If this trip is something you are interested in contact Keith Kaneko. He does a great job of making dreams come true and taking the hassle out of booking trips.

Thank you to everyone, especially the Grand Unified Wou